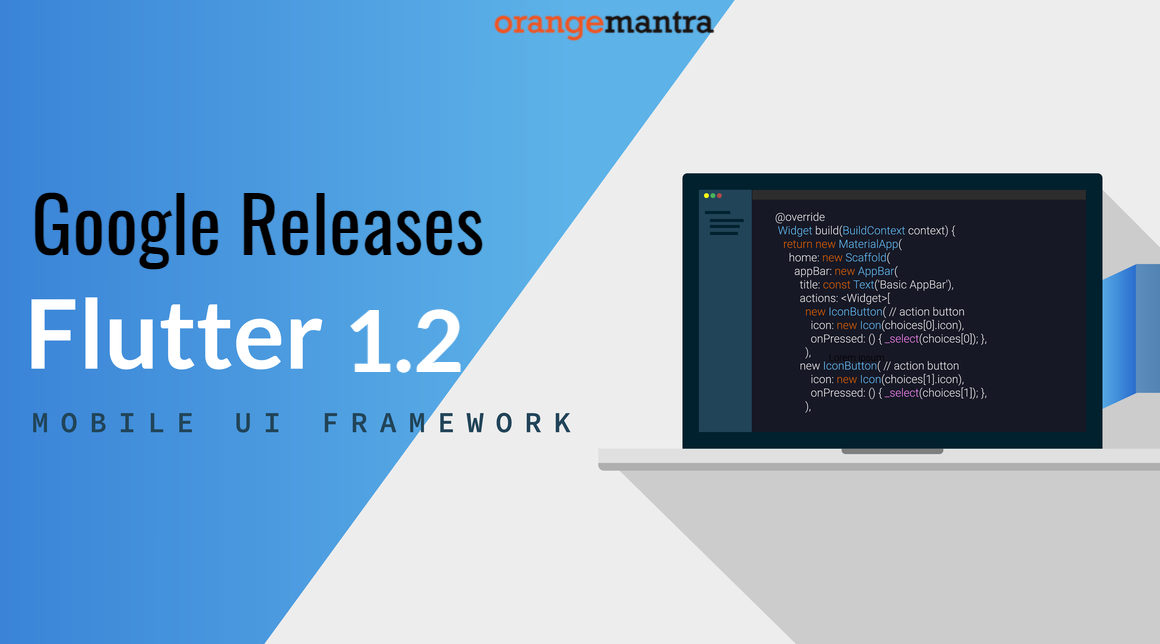 Flutter 1.2 is now available to install. Google released this new version of the UI toolkit introducing capabilities like mobile autofill. Besides performance improvements, this version adds features to make the platform more efficient. In terms of new capabilities for Flutter app development, version 1.2 is a big leap. In this blog post, we will delve deeper into all the major updates, new features, and functionalities of Flutter 1.2.

With this update, Flutter wants to boost the productivity and quality of development on the platform. The update covers wide-ranging areas of the toolkit. These improvements range from elements of the Dart language (in which Flutter is written) to UI enhancements and beyond.

Being an award-winning mobile app development company, we, at OrangeMantra, are excited to use all these new features. Flutter is an important platform not just for us but for the entire app development industry. Google has, in fact, recognized India is Flutter’s key market. India has emerged as the No. 1 region for Flutter app developers. Developers are choosing Flutter as the ideal platform for many reasons, including the speed and flexibility.

The new version aims to decrease the size and latency of Flutter apps. The latest version also uses an updated edition of the Dart programming language. Here are some of the most important updates for mobile app developers.

Flutter developers have long requested for mobile text fields support. That requested has now been fulfilled. Now, developers don’t have to request users to re-enter data that the OS has already collected. Flutter has started to add this functionality to the web too.

Flutter has introduced a new widget, called the InteractiveViewer. It’s designed to build common interactivities into a Flutter app. The activities could range from pan to zoom to drag-and-drop. The API documentation for this widget is only available when developers upload the process of creating the widget.

The new version features a range of updated widgets to match the latest Material guidelines. The updated widgets include Slider and RangeSlider. Besides, version 1.2 also updates the DatePicker to include a compact design and support for date ranges. The new release also enhances the TimePicker with a new style.

The new responsive license page is accessible from the AboutDialog. Using this page, developers can easily match the material guidelines. Besides, they can navigate on all devices. The new license page is designed to work seamlessly on all devices, namely tablets, desktop, and phones. This update will require that every app shows the licenses for the packages they’re using.

Flutter has announced that the pubspec.yaml format is no longer supported for publishing plugins. The old format did not support specifications about which platforms a plugin supports. It was deprecated since Flutter 1.12. Now, Flutter requires this new format for publishing new or updated plugins.

This is the biggest tooling update in Flutter 1.2. It provides a preview of a new feature in the Visual Studio code. It enables developers to bring Dart DevTools directly to the coding workspace. Flutter app developers can choose their favorite page embed using the Dart DevTools menu.

And that’s not all. Flutter has integrated several big and small improvements. Be it an updated version of the Network page or improved import statements and file renaming, v1.2 has so much for you! Flutter offers many advantages over platforms like Swift and Java.

Flutter 1.2 goes above and beyond to enhance overall development quality and user experience. Improvements like size reduction and mobile text autofill are likely to directly enhance user experience. In the blog posting announcing this release, Google also said that Flutter will soon have more updates like null safety. While these updates are specifically useful for mobile app developers, they’ll also boost the popularity of the platform.

At OrangeMantra, a top mobile app development company in India, we relentlessly use all the latest development tools to build best-in-class solutions. Be it Flutter, Java, or Kotlin, we are open to any technology that helps our clients achieve their business goals. You can hire mobile apps developers for us to build impeccable apps. Follow our blogs to stay informed about all things mobile app.

Q. What is Flutter app development?
Flutter is an open-source mobile app UI development toolkit created by Google. It is used to develop applications for Android, iOS, Windows, Mac, Linux, and the web from a single codebase. Flutter supports web app development using standards-based web technologies such as HTML, CSS, and JavaScript.

Q. How much does it cost to build a Flutter app?
The costs of developing a Flutter app depend on several factors. Design complexity, development time, type of features, etc. play an important role in calculating the costs. OrangeMantra builds design-rich apps at competitive and flexible pricing.

Q. Is Flutter better than native?
Mobile apps built on the Flutter toolkit are cross-platform. It means they work seamlessly across operating systems and devices. Whereas native apps perform optimally on a specific OS.