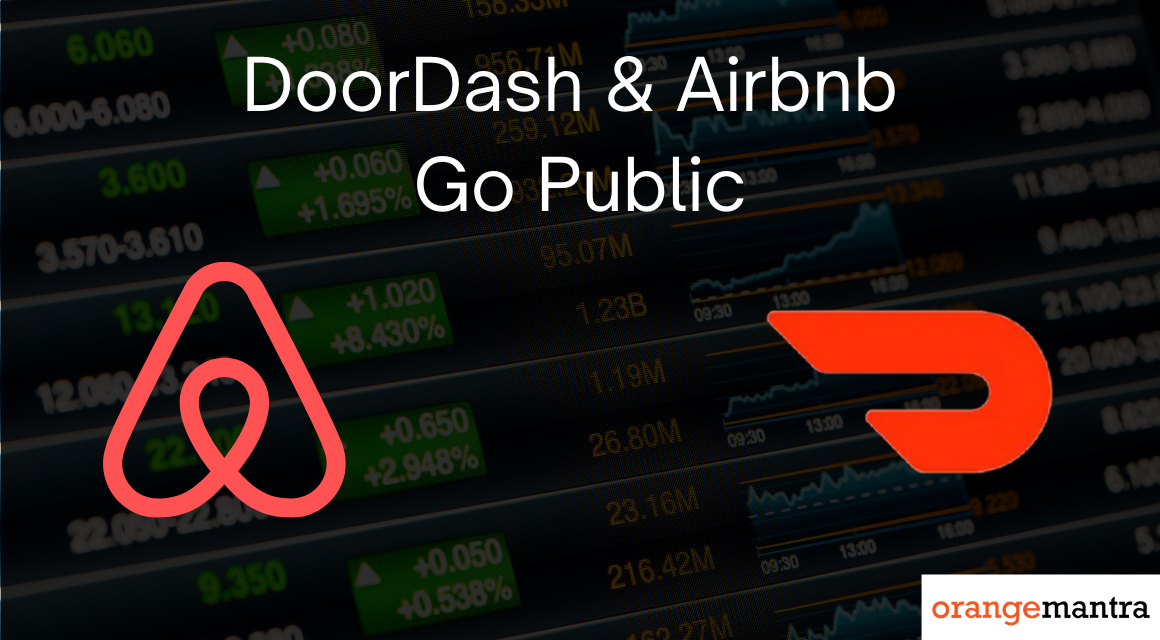 It’s been an encouraging week for the tech start-up world. Two of its stars, DoorDash and Airbnb, are becoming publicly traded companies. The food-delivery company DoorDash announced its initial public offering at a higher-than-expected price, The Wall Street Journal reported on December 8, 2020. And Airbnb, the home-rental company, is set to file an IPO as of this writing.

DoorDash has benefited immensely from the record-setting increase in food delivery demands during the pandemic. The San Francisco-based company dominates nearly half of the U.S. food delivery market (according to WSJ), which is up from one-third a year ago. As people followed stay-at-home orders, food delivery apps saw a dramatic surge not just in the U.S. but around the world.

A year of record-setting growth

The home-sharing company Airbnb, like many other tech startups, has seen significant growth during the pandemic. Home rentals outperformed hotels in 27 global markets since the onset of COVID-19, according to a report by the benchmarking firm STR. Airbnb is globally the biggest player in the short-term home rental market, with over 7 million listings in more than 200 countries (according to The New York Times). The company has seen rampant growth over the past few years.

DoorDash provides a platform that connects restaurants, delivery professionals, and customers to facilitate takeout orders. The company reported revenue of $1.92 billion in nine months since the onset of COVID-19. It’s a 200% year-over-year growth, according to the prospectus filed for its initial public offering.

Tony Xu, DoorDash’s CEO, said that the company plans to expand beyond food delivery and into all local business and convenience economies. “If we can make the delivery of ice cream before it melts, or pizza before it gets cold, or groceries in an hour, we can make the on-demand delivery of anything within a city a reality,” the CEO wrote in a letter.

Investors worldwide have been excited about DoorDash’s strong growth. As consumers moved away from dining in restaurants the usages of on-demand food delivery apps surged around the world. In India, for instance, Zomato and Swiggy saw a substantial rise in demands.  In the quarter that ended in June, DoorDash reported a profit of $23 million on $674 million in revenue.

An IPO parade of start-ups

The IPOs of DoorDash and Airbnb are parts of a now-emerging trend of valuable start-ups rushing to go public. For the stock market, 2020 has been the busiest year for IPO since 1999. It has partly been driven by lower interest rates and significant growth for tech companies during the pandemic. Airbnb, too, raised its proposed stock price after seeing signs of higher demands from investors.

The coronavirus crisis has been a boon for tech companies. It’s not just the world’s technology superstars, including Amazon, Google, and Facebook, that reported unprecedented growth. People stuck at homes relied on technology for virtually all kinds of services. And on-demand delivery apps have emerged as the most prominent beneficiaries of this trend.

A novel approach to IPO

Both DoorDash and Airbnb announced that they would use a new type of “hybrid auction” system for their IPOs. The companies asked investors to place stock orders through the computerized system in which they outline the number of shares they are seeking and the price. Investors also have the option to mention how much they are willing to buy at various price points.

It’s a novel approach and differs significantly from a traditional IPO. In a conventional public offering, underwriters directly communicate with potential investors and play a more crucial role in setting the stock price. Under this hybrid auction system, DoorDash and Airbnb executives will have the same information as to their respective bankers.

DoorDash leads the U.S. meal delivery market with more than 18 million customers. Its stock market debut provides some relief to the investors, including the Japanese conglomerate Softbank. As of this writing, Goldman Sachs Group and JPMorgan Chase are leading DoorDash’s IPO, while Morgan Stanley and Goldman are leading Airbnb’s.

Want to make a deeply customized food delivery app for your business?