Why You Should Develop the Next iOS App Using Swift 5 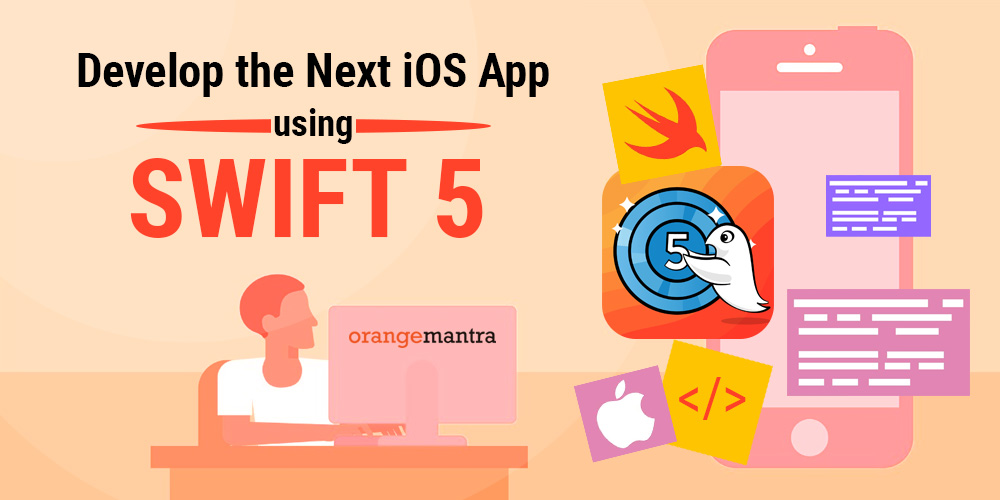 Swift is a highly intuitive programming language for Apple’s operating systems, including iOS, macOS, and watchOS. Lately, Swift has been extensively used for iOS app development worldwide. This rising popularity of the programming language can be attributed to its unique and useful features. For instance, Swift 5 provides an interactive platform with extensive syntax.

The iPhone app development platform has evolved greatly over the past. With its latest version, Swift 5, the programming language is poised to become a game-changer in the mobile app development industry. To properly understand the benefits of Swift development, you have to look at the features offered by the latest release of Swift.

A rising number of iOS app developers worldwide are choosing Swift as their go-to coding language. They’re doing so for obvious reasons: Swift is fast, safe, and one of the most modern coding languages. With this development platform, programmers have the liberty to be more creative and interactive. Swift brings together the features of both C and Objective C coding languages.

Also read this : Top iOS App Development Trends That Will Change The Game In 2020

Swift is better than Objective C in many different ways. Swift is not a strict superset of the programming language C. This enables Swift to easily use syntax constructs. Hence iPhone app developers can seamlessly implement custom operators while coding.

Besides, Swift is a dynamically typed coding language. This means it can leverage the most recent advances in the type systems of programming.

The recent updates, 5.0 and 5.1, have made Swift even more efficient, robust, and flexible. Let’s discuss the most striking features of Swift 5 to understand its efficiency.

What Are the Key Features of the Swift 5 Programming Language?

Swift 5 is a major stride in the language’s evolution. From ABI stability to a new runtime, the update provides a swath of improvements and features. This update also reflects Apple’s vision of continuous innovation and evolution.

Apps built on Swift 5 are smaller in size. This makes it easier to install and use, thus improving the overall user experience. This also makes the iOS app development process rapid and more efficient. Faster app launch means a superior app experience for the end-users. Also, users can quickly install and updated version of an app due to its smaller size.

The new libraries are available on Swift 5 offer better flexibility and for initialization of a code array. The libraries also provide APIs for working with Strings. Using these libraries, developers can easily handle contiguous strings. Besides, the libraries provide an identifiable protocol for extending reductions and vectors.

Swift 5 provides a stable ABI for iOS app development and improvements in existing apps. This will make the app development process simpler as these apps will not include any libraries. In fact, Apple has also introduced Swift 5 libraries to its watchOS, tvOS, and macOS operating systems.

Swift’s package manager comes with an array of new features and functionalities. These include customized deployment, dependency mirroring, and target-specific build setting. Also, the Swift run command can easily import libraries in REPL.

How Enterprises Benefit from iOS Apps Built on Swift

The features of Swift 5 benefit businesses in many ways. It’s dynamism, flexibility, and technical superiority are very much relevant to business management. The most striking feature of Swift in terms of business application is its Application Binary Interface (ABI). Swift has an extremely stable ABI that greatly benefits business owners.

The most remarkable advantages of using Swift-built apps for your business are listed below.

With Swift 5, the size of the app significantly reduces. This is a win-win situation both for a business and its customers. The smaller size also means better performance of the app.

Swift 5 has very dynamic libraries. These increase the launch time by creating cache files in the memory that are shared among other apps. Lesser launch time contributes to improving overall user experience.

iOS app development using Swift 5 ensures a seamless performance of every functionality. With Swift 5, businesses get an app free from glitches that cut the app installation rate. This could further translate into better business performance.

What language is Swift similar to?

Swift, a coding language developed by Apple, similar to languages like Ruby and Python. For instance, as in Python, it’s not necessary to end statements with a semicolon in Swift.

What coding language is used for iOS apps?

Swift and Objective-C are the most commonly used programming languages for iOS app development. Swift has become wildly popular among iOS app developers.

How do I start iOS app development?

If you’re a business owner, the best way to start building an iOS app is to seek help from professional app developers. At OrangeMantra, we’ve helped a large number of businesses use iOS apps for advancing their business.

How much does it cost to build an iOS app?

The development cost of an iOS app depends on what kind of device and purpose it’s being built. For example, the cost would be lower if you need the app with basic features and functionalities.

Choosing Swift 5 for developing iOS apps means not just making the development process efficient. It also means that you are creating a captivating user experience for customers. iOS app developers and entrepreneurs worldwide are increasingly using Swift for achieving their goals. With immense flexibility and scopes of creativity, Swift 5 is one of the best app development platforms out there.