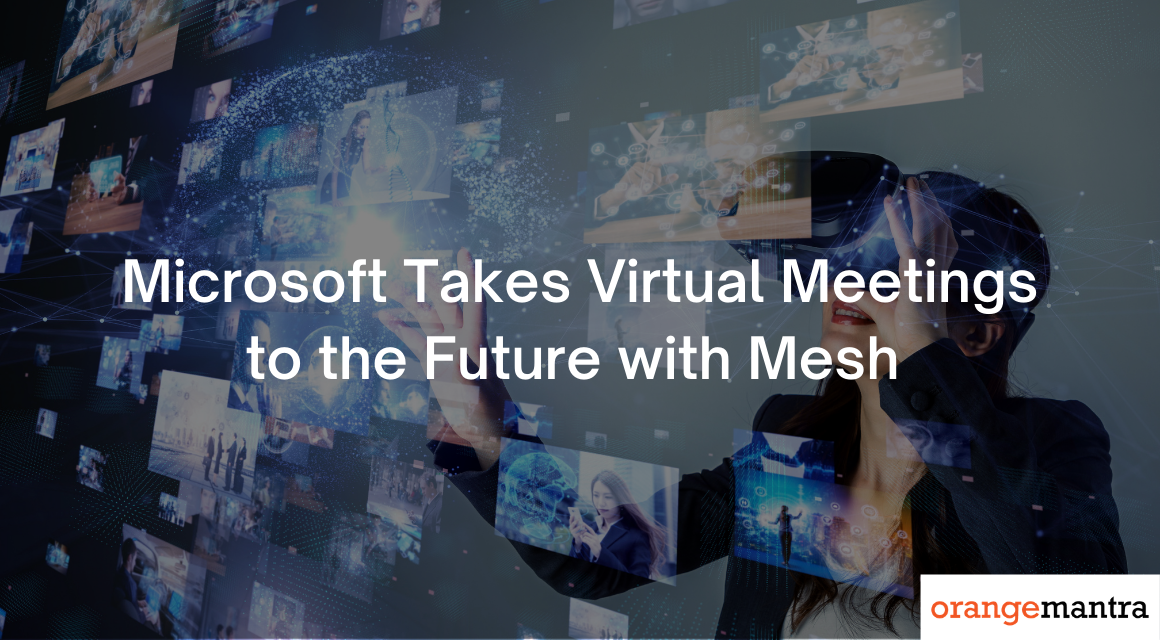 What happens when you mix Zoom with Facebook and add some VR to it? Something exciting and futuristic, right? Well, that’s what Microsoft has done with the launch of Mesh. It’s Microsoft’s vision for the future VR and AR – or mixed reality, as the tech giant calls it.

Microsoft Mesh is a collaborative platform that enables users to share virtual experiences on different devices. “This has been the dream of mixed reality, the idea from the very beginning,” said Microsoft’s Alex Kipman, the inventor of Kinect and HoloLens. “You can actually feel like you’re in the same place with someone sharing content. Or you can teleport from different mixed reality devices and be present with people even when you’re not physically together,” Kipman told The Verge.

People who have participated in Mesh’s demonstration said it felt like a Microsoft Teams meeting set in the future. Microsoft’s newly launched service relies on a phenomenon called ‘holoportation.’ Mesh takes holoportation from just a sci-fi concept to actuality. Tech observers say Mesh is a big step for the future of mixed reality. It creates a tech-enabled environment where digital objects blend with the real world.

When you attend a meeting in Microsoft Mesh, you can see others appearing next to you as avatars. You could share experiences with the participants, like handing virtual things. It gives you a more immersive virtual meeting experience than Zoom calls.

Microsoft Mesh isn’t just another virtual meeting app. It’s an incredibly evolved platform built on top of the Azure cloud solution. Microsoft says it’s hoping that architects, engineers, and designers will see the unique features of Mesh. A collaborative platform like this is particularly useful when design and engineering teams cannot meet in-person due to the pandemic.

Mesh allows users in different physical spaces to collaborate in a virtual environment. You could join the Mesh environment using different devices. Developers can add it to their apps using Azure. People using Mesh could create their own avatars and collaborate with others.

Mesh will be available on a variety of platforms and devices. These include HoloLens 2, most VR headsets, tablets, smartphones, and PCs. The tech giant on March 2 launched a preview of the Mesh app for HoloLens 2 alongside a Mesh-enabled AltspaceVR. Additionally, Microsoft plans to integrate Mesh into Teams and Dynamics 365 in the future.

Virtual collaboration is not new for the tech industry. What Microsoft is doing is, however, unique in many ways. The tech behemoth wants to unify the fragmented space of virtual collaborations. Whether you’re using an Oculus headset, a laptop, or a mobile device (iOS or Android), you will be able to sign in and connect with others’ avatars. Microsoft plans to go even further, converting the avatars into actual holograms.

Avatars make you look like a cartoony or deformed. But when you use holograms, they appear like live 3-D videos. The process of creating such volumetric holograms, though, is in the early-stage — and expensive. If you want to create the most advanced holograms you need a facility like Microsoft’s Mixed Reality Capture Studio. It requires you to perform in front of a giant screen with over 150 cameras recording from various angles.

Tech experts say it will take some time before we have our own holograms. Also, the hardware is not ready for consumers yet. By far, Facebook’s Oculus Quest 2 headset is the most suitable equipment for such purposes. Microsoft said it’s working on integrating the technology in its HoloLens headset.

Microsoft mesh promises next-level workplace collaborations. Instead of joining a Zoom or Microsoft Teams meeting, you could pop into a virtual conference room with your colleagues’ avatars. A marketing team, for example, could whiteboard their next big campaign ideas by using digital pens and clip art. If you’re an industrial design or architect, you could review 3D prototypes together. Medical researchers could use a Mesh meeting to analyze diagrams and 3D organs.

Mixed reality as the future of AR/VR

Microsoft is seemingly ambitious about the future of mixed reality. With the launch of Mesh, the company seeks to stay ahead of others like Apple and Facebook, who are also interested in this domain.  Microsoft CEO Satya Nadella compared Mesh with Xbox Live.

“Think about what Xbox Live did for gaming. We went from single-player to multiplayer, creating communities that helped people connect and achieve together. Now just imagine if the same thing happened with mixed reality,” said Nadella.

Being a leading player in India’s digital solutions market, we, at OrangeMantra, take futuristic tech like Mesh incredibly seriously. Whether it’s cloud-based ERP solutions or AI-enabled remote team collaboration tools, we’re poised to build everything you need to operate in a digital-first environment.

Since the onset of the pandemic, we’ve helped hundreds of clients around the world overcome business disruptions. Our end-to-end enterprise software applications enabled small businesses and Fortune 500 companies alike to operate smoothly in these extraordinary times. Reach out to us to build deeply personalized tech solutions for your business.

Want to build cutting-edge enterprise software for your business?