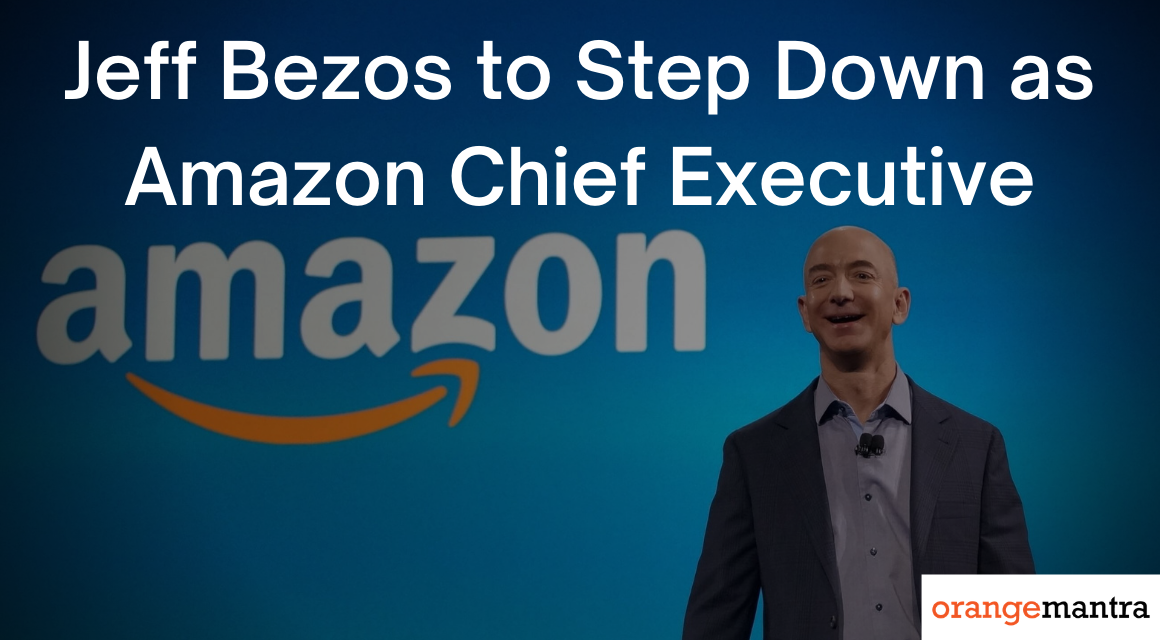 Jeff Bezos to Step Down as Amazon Chief Executive

Amazon founder Jeff Bezos recently announced that he would be stepping down as the eCommerce behemoth’s CEO later this year. Tech industry experts believe it’s a notable development for the industry. Amazon is built on his ideas and ideals, they say. His relentless quest for ‘customer ecstasy’ made him one of the world’s wealthiest people, The Guardian reported.

Bezos, in his career switch announcement, said that he would now focus on The Washington Post. He bought the newspaper in 2013. The tech founder would also be exploring space with his rocket company Blue Origin. Besides, the Amazon boss said he’d devote more time to the Bezos Earth Fund. It seeks to support scientists, activists, and nongovernmental organizations to solve environmental problems.

In 1994, the year Bezos founded Amazon, he was a Wall Street finance nerd. He bet that the internet would be a big deal in the future. As many of you know, Bezos decided to get started with selling books online. Today, Amazon is worth $1.7 trillion. It’s one of the biggest companies out there — and a leading contributor to Big Tech. Over the past 27 years, Bezos led Amazon to reimagine shopping, reshape commodities from groceries to computer chips, and hired more people than any other American company.

Andy Jassy, who has led AWS since it started, will be Amazon’s next chief executive. With Jassy becoming in charge, AWS will likely become more important to Amazon, experts believe. The 15-year-old cloud computing business of Amazon has seen remarkable growth. Bezos will remain Amazon’s biggest shareholder and on the company’s board of directors. He owns 10.6 percent of the company, according to The New York Times.

AWS’s business soared with the pandemic-induced demands for enterprise cloud solutions worldwide. As businesses and organizations moved online, the cloud became a must. And it prompted a dramatic surge in demands for AWS services and solutions across industries.

Andy Jassy built Amazon Web Services from a tiny startup. Today, AWS generates half of Amazon’s profits. The cloud computing titan supports almost everything, from Netflix to Slack. Cloud solutions, more than all other things, have been the enabler of the second wave of digital transformation in the pandemic era.

Jeff Bezos has made it almost impossible for consumers to avoid Amazon. And it is one of his most remarkable achievements. Bezos’ ambition has been to dominate the entire economy. And that’s not an overstatement. When Amazon acquired the retail giant Whole Foods in 2017, the market value of top American retail companies declined by billions.

In 2018, Amazon acquired an online pharmacy marketplace, called PillPack. The acquisition worried investors in the traditional pharmacy industry. Online medicine marketplaces and other health-tech solutions are gaining traction across the world. In another significant move, Amazon announced a healthcare partnership with Berkshire Hathaway and JPMorgan Chase. This collaboration is aimed at providing insurance coverage to these companies’ employees.

Bezos wanted to call his online store “Relentless.” Initially, he registered the company as “relentless.com.” However, he finally settled on Amazon as the name. Relentless is a word Bezos likes a lot. It also defines the corporate values of Amazon — and the way its founder thinks.

Every year, Bezos liquidates a substantial amount of his Amazon stock and puts it into Blue Origin, the rocket company he founded in 2000. It develops technologies that facilitate space travel and future settlement of humanity in plants other than earth. “We want to go to space to protect this plant,” Bezos famously said in a 2009 speech.

Blue Origin has been working on several projects that Bezos could now bolster. For instance, New Shepard was developed to safely and affordably people into space on suborbital missions. Such trips would enable travelers to spend a few minutes in microgravity and enjoy the view of the earth from high up.

While Bezos is leaving the top post at a high point for Amazon’s business, the company faces multitudes of challenges. It’s under increasing scrutiny from lawmakers and government agencies around the world. For instance, in November 2020, the European Union brought antitrust charges against Amazon. EU regulators said the company violated competition laws.

The stepping down of Bezos gives Amazon a chance to reset its public image around the world. People who have worked with the incoming CEO Andy Jassy said that while he’s like Bezos in some ways, his temper is gentler and more low-key.

Want to upgrade your tech infrastructure with cutting-edge cloud solutions?