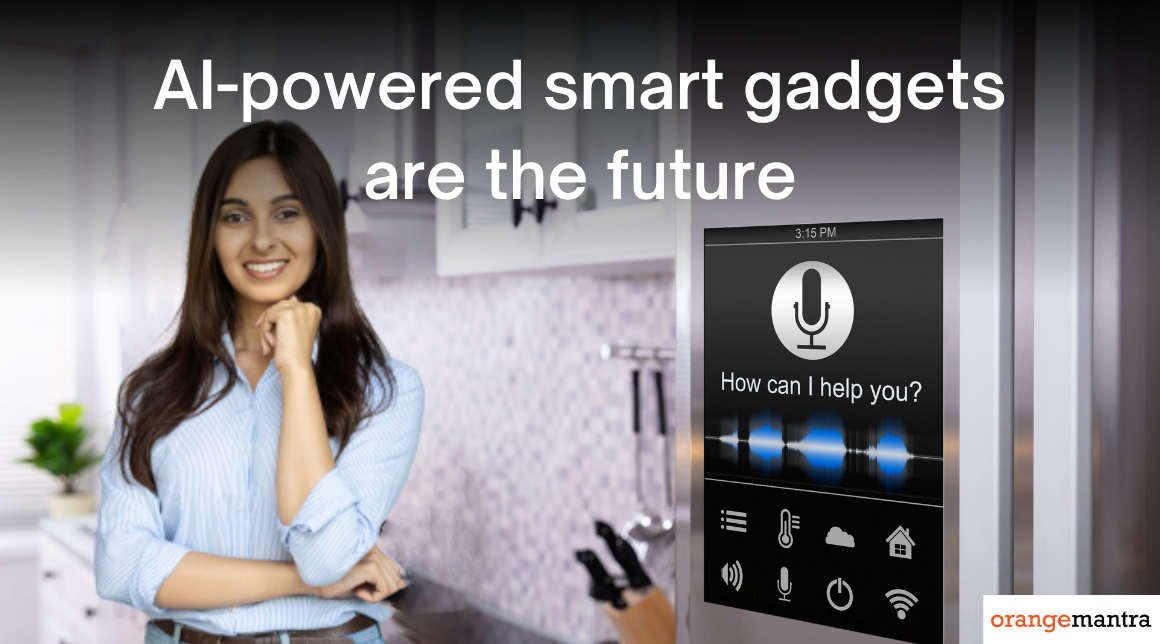 Artificial intelligence is likely to emerge as the most transformative technological force of this decade—or maybe this century! From automated investments to gravitational wave detection in space, AI is breaking boundaries in many areas.

For instance, an AI application built by Micron Technology allows the company to invest its funds and generate higher returns in the current low-interest-rate environment. There are many more such use cases of AI solutions emerging across industries. With tech gadgets dominating our lives, AI is gearing up for a more tech-driven future for businesses and consumers alike.

Artificial Intelligence-Powered Gadgets of the Future

From robots that can find your lost stuff to electronic noses that can smell food, AI researchers are building a glamorous array of futuristic gadgets. Here are glimpses into the futuristic AI world.

Smart fridges & air purifiers with a sense of smell

AI researchers are developing electronic noses that could make homes safer and foods tastier. Using AI algorithms, developers can train the e-noses to identity and quality smells in a diverse sensory environment. And artificial intelligence companies are already introducing such solutions to the market. For instance, Stratuscent, a Montreal-based company, launched a chip in 2020 that can detect and catalog toxic fumes and volatile chemicals in indoor spaces, The Wall Street Journal reported.

AI observers say in the next couple of years, this e-nose could be integrated into a smart home system or in a smart air purifier. Such systems rely on the most evolved IoT solutions and AI capabilities. They can enable real-time air quality monitoring in smart air purifiers. Gadgets like smart air purifiers are getting increasingly popular in Indian cities amid rising air pollution levels.

Smart fridges equipped with AI solutions can detect early signs of expiring food. It can then alert users about the items that are about to expire. AI researchers are making strides in building such systems. For example, researchers at the Nanyang Technological University of Singapore have developed a colored bar code that reacts to gasses from decaying food. It also has a barcode reader that uses AI models to predict food freshness.

Robots that can find your lost stuff

Misplaced keys and TV remotes have long created havoc in many people’s lives. Scientists are betting on AI to change that. Researchers at MIT are working on a robot that uses artificial intelligence and wireless technology to find lost items.

A roving robot fitted with a robotic arm, for example, will send radio waves from an RFID tag printed on the item. By analyzing the electromagnetic signals, it calculates the distance to the target item. Then the robot uses a built-in camera to navigate to the destination and pick up the target item. An algorithm helps the robot adapt to changing items and environments. In a more AI-dominant future, robots like this become home helpers. These robots are expected to be available for consumers in five to 10 years, according to WSJ.

Smart toilets that can detect pathogens

Intelligent toilets can help us avoid contracting deadly microbes like the novel coronavirus. They can also enable public health experts to deal with the taboo undertaking of screening feces for pathogens. Researchers at Stanford University have now developed a toilet prototype that uses an AI-trained camera to spot the form of feces. It also monitors the color and flow of urine.

Wearable Robotic Systems Lab is developing smart insoles for shoes that analyze wearers’ gaits and monitor their steps. A new system called SportSole uses AI models to analyze sensor data and accurately measure the speed and length of the user’s stride. All these happen in real-time. Runners could get feedback on their techniques and compare performances with other athletes.

And that’s not all. SportSole could also help diagnose neurological disorders that affect motor functions. It could also quantify the medical efficacy of treatments for such disorders and reduce the risks of accidents. Researchers at Stanford and Columbia universities are already using the technology to monitor children with motor disorders. SportSole will be available to consumers by 2023.

If you’re enthusiastic about AI, you already know how smart devices are rapidly learning new tricks. Be it telematics-powered smart tires or AI-enabled smell-sensing fridges, the future of gadgets certainly belongs to artificial intelligence. And these are just some of the developments in the extensive wave of AI-powered devices that artificial intelligence companies and researchers worldwide are developing. But it will be some time before we see large-scale adopts expanding from Siri and Alexa to food-smelling AI.

Want to build a custom AI solution to make your business futuristic?