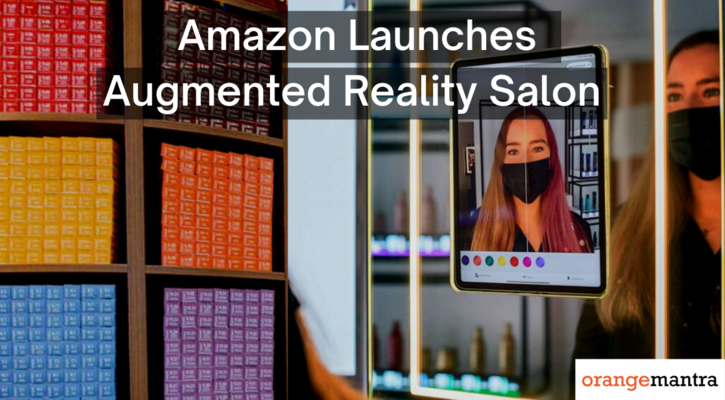 Initially, the 1,500 sq. ft salon will test the use of augmented reality solutions. It will also experiment with several out-of-the-box consumer technologies. Customers will be able to try out new hair colours virtually and “capture their new look in a dedicated creative area,” Amazon said in a statement.

Analysts say the salon is more about experimenting with technologies like AR. Amazon will use the salon’s AR technology to virtually experiment with different hair colors before customers pick a new shade. The eCommerce giant may also want to collect critical data on customer experiences. It could then use this data on its shopping site and other consumer-facing platforms.

Amazon has not yet explained what kind of data the salon will collect from customers. It’s, however, evident that the Big Tech company wants to learn more about how emerging retail technologies would work in real-world scenarios. But the fact that the salon will capture customers’ images for its VR-enabled hair color trial raises questions about what the company plans to do with the data. Privacy advocates are curious about whether Amazon intends to learn about a specific technology or use the customer data?

The online retail giant is pulling out all the stops to deploy cutting-edge retail solutions at the two-storey salon. It includes entertainment streaming on Amazon Fire tablets and a new experiment with the “point-and-learn” technology. It’s a system that allows customers to point to products on display shelves and learn more through content like videos. Interested customers can then scan a QR code, which takes them to Amazon’s online shopping site.

If store visitors want to purchase items, such as hair conditioners, they must scan the QR code displayed on the shelf. Then they can order it from Amazon’s U.K. shopping site. In its statement, Amazon said the salon was designed as an experimental venue to showcase new products and retail technology.

Building on a new ambition

Amazon opened its first bookstore in Seattle, Washington, in 2015. Two years later, it acquired the grocery store chain Whole Foods and opened several stores. In its Go and Go Grocery stores, Amazon showcased the company’s cashier-less Just Walk Out retail innovation. Besides, Amazon also operates stores that only sell products with 4-star and 5-star ratings on its eCommerce marketplace. Amazon’s enviable success has, over the years, inspired business owners to embrace eCommerce solutions to upgrade their ventures.

The opening of Amazon Salon reiterates the company’s interest in retail and may reflect its ambitions in markets that combine both goods and services,” said Jason Goldberg, chief commerce strategy officer at marketing and communications firm Publicis Groupe SA.

Amazon often launches experimental offerings, learns from them, and moves on. In other cases, the company incorporates the expertise into new projects or abandons the idea altogether. Amazon said it has no plans to open salons in other locations.

Disruptions and innovations induced by the pandemic mean your retail business needs to be more tech-savvy than ever. You don’t have to be an Amazon or Walmart to use the best-in-class retail solutions. Today, small and mid-sized retailers need to implement technology more than ever. OrangeMantra enables you to do just that. Our industry-leading retail and enterprise solutions have powered independent retailers and top FMCG companies alike. Reach out to us for a free retail tech consultation.

Looking for cutting-edge retail tech solutions for your business?

Shopify Pricing Plan Guide 2022 – Everything You Need to Know