Flutter vs. Swift – Which One Is Best for iOS App Development? 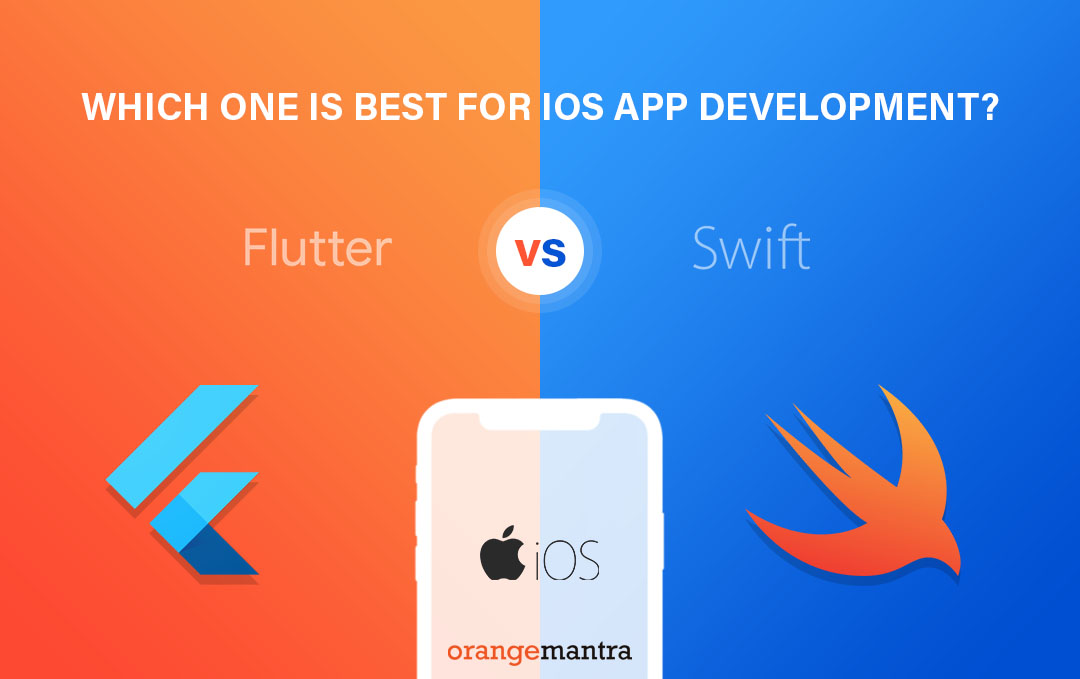 It wouldn’t be an overstatement to say Flutter as the rising start in the world of iOS app development. With it’s massively growing popularity, the Flutter vs. Swift battle is becoming more intense with every passing day. That’s why we thought to dive into the features of these two much-talked-about programming languages for iOS app development.

The Flutter vs. Swift battle is also being fuelled by the growing demand for hybrid mobile app development. As more and more businesses transform digitally, this demand will only grow. We’ll present an elaborate comparison between these two trending hybrid app development platforms. But let’s consider each platform individually first for a better understanding.

Swift
Swift is a coding language for iOS app development widely used by programmers worldwide. Apple developed Swift as a rapid, type-safe, and dynamic programming language. One of the most striking features of this language is that it constantly evolves with changing trends and demands.

Flutter
Flutter is an open-source, cross-platform software development kit. Launched and maintained by Google, this programming language is designed to build efficient hybrid apps. This language can use a single codebase and uses a Dart language. This platform also provides detailed documentation for every development project. Flutter is very much similar to another popular iOS development platform, React Native.

Flutter vs. Swift – Comparing the Features

Both Flutter and Swift are being widely used by mobile app developers. You cannot understand which app is better for you without comparing one app’s features with another.

1. Development Time
With Swift, the development time for the native iOS app can be measured using Xcode or Xcode build command line. After you run the build command from the product menu, the build time appears on the display. In the case of Swift, a clean build usually takes around 13.334 seconds. However, in Xcode, a consecutive build takes less than a second.

While using Flutter, you can use a similar command to find out the development time. We’ve found that iOS app development on Flutter is comparatively slower than Swift. But this changes once you’ve move past the threshold of initial clean builds. Flutter becomes quite faster after that.

2. App Onboarding
Swift enables you to develop an iOS app using native tools from Apple. You need Xcode as an integrated development environment. After providing the input, Xcode creates an iOS template code. This template can be used for writing codes for the app. After the programming is complete for the iOS app, you get a Press Me button display. At this point, your iOS app development is complete.

For Flutter, you need to use Xcode and the Flutter binary. You can also use Android Studio or IntelliJ IDEA or other text editors. Check all the requirements by running the Flutter doctor command. Then run the required commands for writing a Flutter app.

Comparing both the onboarding process, you can easily conclude that native app development with Swift is more efficient and less painful.

3. App Reloading
Mobile app development with Swift requires the incorporation of an array of changes in button names, data, and accessibility. Besides, you need to ensure that the simulator or the device reflects the changes you make. The reloading features help you to make changes on the app in real-time. This further enables faster iOS app development and accurate evaluation.

While using Flutter, you get access to this interesting feature called Hot Reload. It updates all the changes on the app within a few seconds. Hence, when it comes to reloading of apps, Flutter proves to be faster than Swift.

4. App Testing and Documentation
Testing is significantly different in Swift and Flutter. For native iOS apps with Swift, Apple provides XCTest. This is a highly efficient platform for testing native apps. The tool offers a wide range of testing features, including UI testing, performance testing, and integration testing, among others. Apple regularly updates the testing tools as part of the iOS app development package.

Flutter, too, provides a robust testing framework as part of its development kit. With Flutter, developers can easily write clean codes right from the beginning. Other testing features enable you to make functionality and the unit testing process more effective. Additionally, Flutter also provides a rapid documentation process for every iOS app development project. With the documentation capabilities, iOS app developers can easily manage an app development process at every stage.

Every Flutter vs. Swift discussion would bring us to the conclusion that both these platforms are great for iOS app development. The choice is ultimately yours. And like most of us, that choice would be largely influenced by your specific requirements. For instance, Swift is better when it comes to development time. Whereas, in areas like testing and documentation, Flutter is the preferred choice. At OrangeMantra, a globally trusted iOS app development company, we extensively use both these programming languages. Our diverse app development services are bolstered by tools like Flutter, Swift, and many others.

Q. What is Swift for iOS app development?

Swift is an intuitive programming language developed and operated by Apple. It’s used for mobile apps to be used on iOS, Mac, Apple TV, and Apple Watch operating systems.

Q. What is Flutter for mobile app development?
Flutter is an open-source software development kit created by Google. Flutter is used to develop apps for operating systems including Android, iOS, and Mac. Flutter is user friendly and easy-to-learn.

Q. Is Flutter good for iOS app development?
Flutter offers an array of advantages for developers and business owners. With Flutter, you can build a beautiful, high-performance iOS app that meets your requirements.

Q.How much does it cost to build an iOS app?
The development cost for an iOS app depends on what kind of app you’re planning to build. Apps with basic features and less functionality cost less than the ones with advanced features. OrangeMantra offers competitive pricing for iOS app development.

Q.How long does it take to build an iOS app?
Several factors influence the build time of an iOS app. The most important ones are the kind of app you want, what platform you want to choose, and what kind of team/ developer you choose. At OrangeMantra, we follow a predefined iOS app development process and deliver every app without any delay.

Have an iOS app development idea in mind?