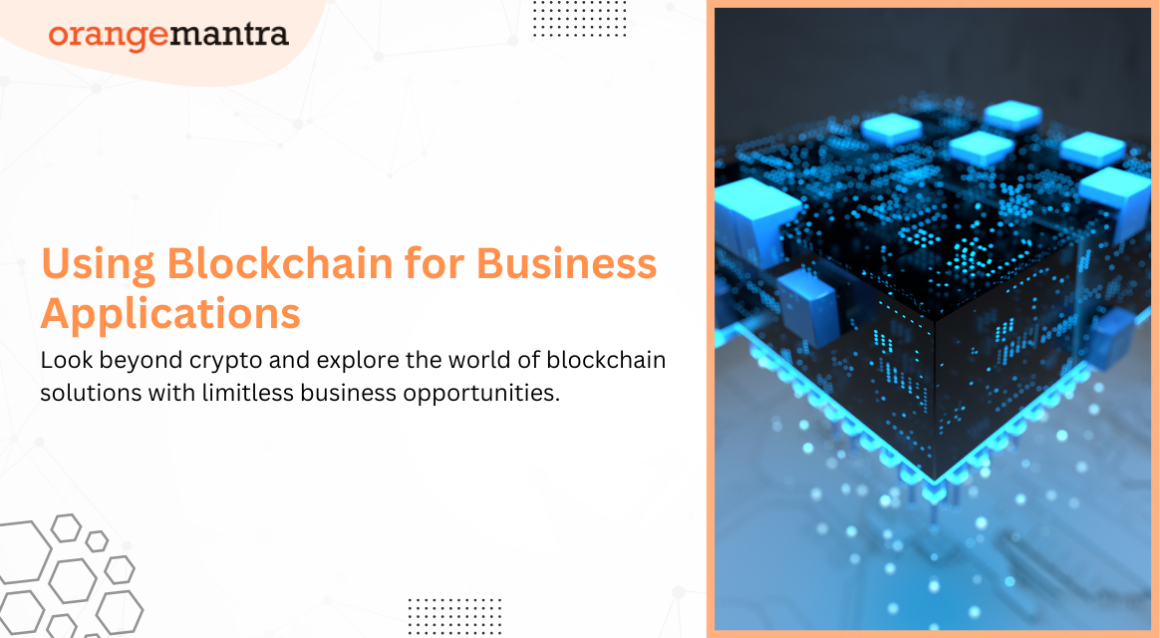 Legalizing cryptocurrencies has become a major topic of debate in the current era. Meanwhile, the hype around blockchain is consistent as businesses and investors are longing to leverage blockchain solutions for creating enticing solutions.

Here are some incredible blockchain statistics that will leave you startled: 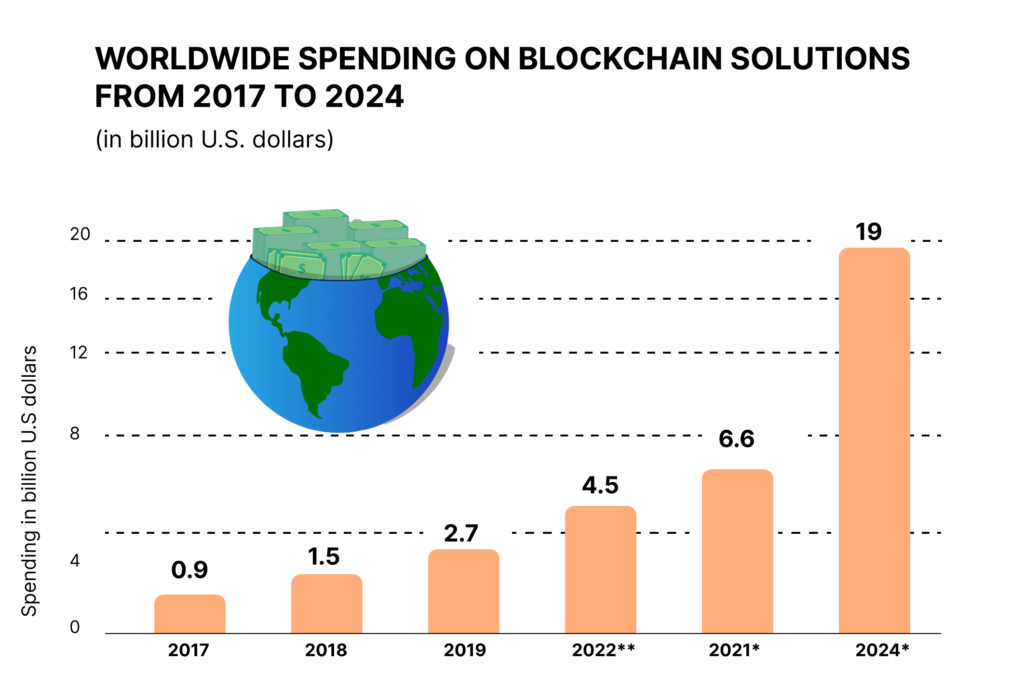 In short, Blockchain is of next-generation business process software solution that will radicalize operations across industries. Simply, it is a collaborative technology that can allow businesses to build connections and forge partnerships through an existing network.

Altogether, Blockchain improves the processes that happen between companies, radicalizing and reducing the cost of trust. This has significant benefits because it offers much higher returns per investment dollar spent than traditional investments – which are often used internally.

From 2022-2030, the potential for cryptocurrencies like Bitcoin, Ethereum, and Ripple are projected to grow at an annual compounded growth rate (CAGR) of 85.9%. The growth in Venture Capital Investment for new blockchain start-ups is attributed to this expanding market.

For example, when Circle Internet Financial Ltd revealed in May 2021 that it had secured USD 440 million in investments from institutional and strategic investors; they then allocated these funds towards growing internally and abroad. 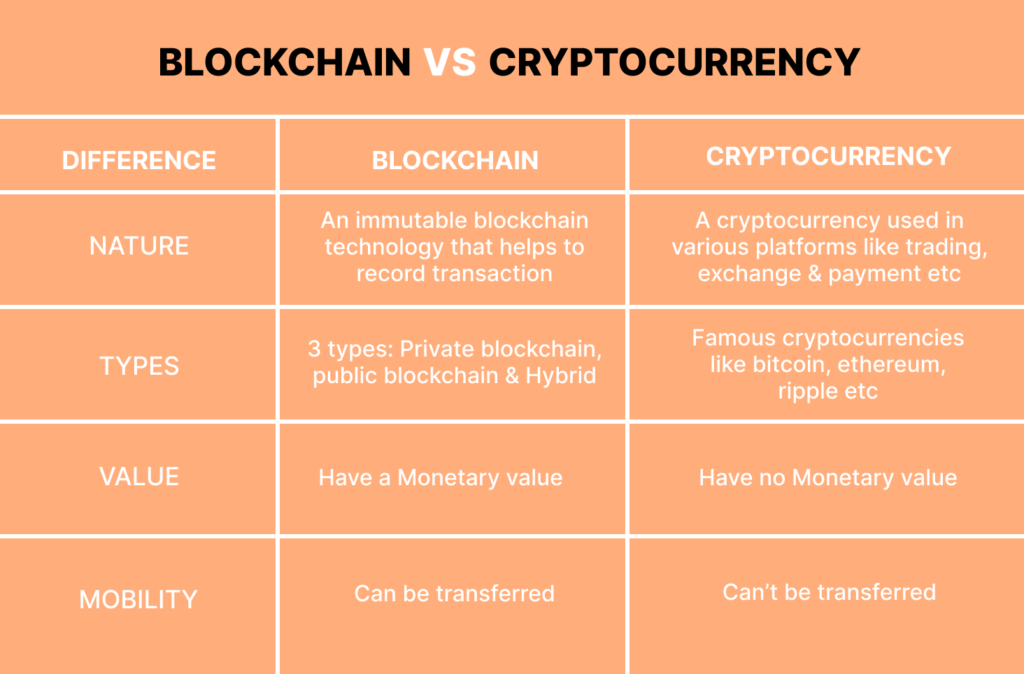 Thus, since we want to explore how blockchain technology can be employed within various industries to simplify/secure processes given its benefits – let’s explore what is exactly Blockchain and how it works.

So, What Is Blockchain Exactly?

Blockchain is a digital ledger of transactions with a wide range of data blocks distributed across the entire network of computers. All these blocks are encrypted via cryptography and connect via has in the blockchain. Each block in the chain stores several transactions that are many impacting.

So, if you are thinking about leveraging this solution, you must connect with a blockchain development company to create business-oriented mobile apps.

How Do Blockchains Work?

A blockchain is a type of digital ledger where all transactions are recorded chronologically and cannot be altered without the agreement of the parties to that transaction. A block in this type of system stores information about any changes made to the records it holds.

While also containing references (called hashes) to previous blocks within the sequence. This makes it extremely difficult for anyone to violate or tamper with records stored within a blockchain network.

You’ll need between 2 and 1TB of storage space to set up a blockchain – which may not be feasible for most mobile devices. DApps (Decentralized Applications) typically function on only a small portion of the chain, so there’s no problem accessing them. With capabilities like these, blockchain is transforming businesses in ways unimaginable before. 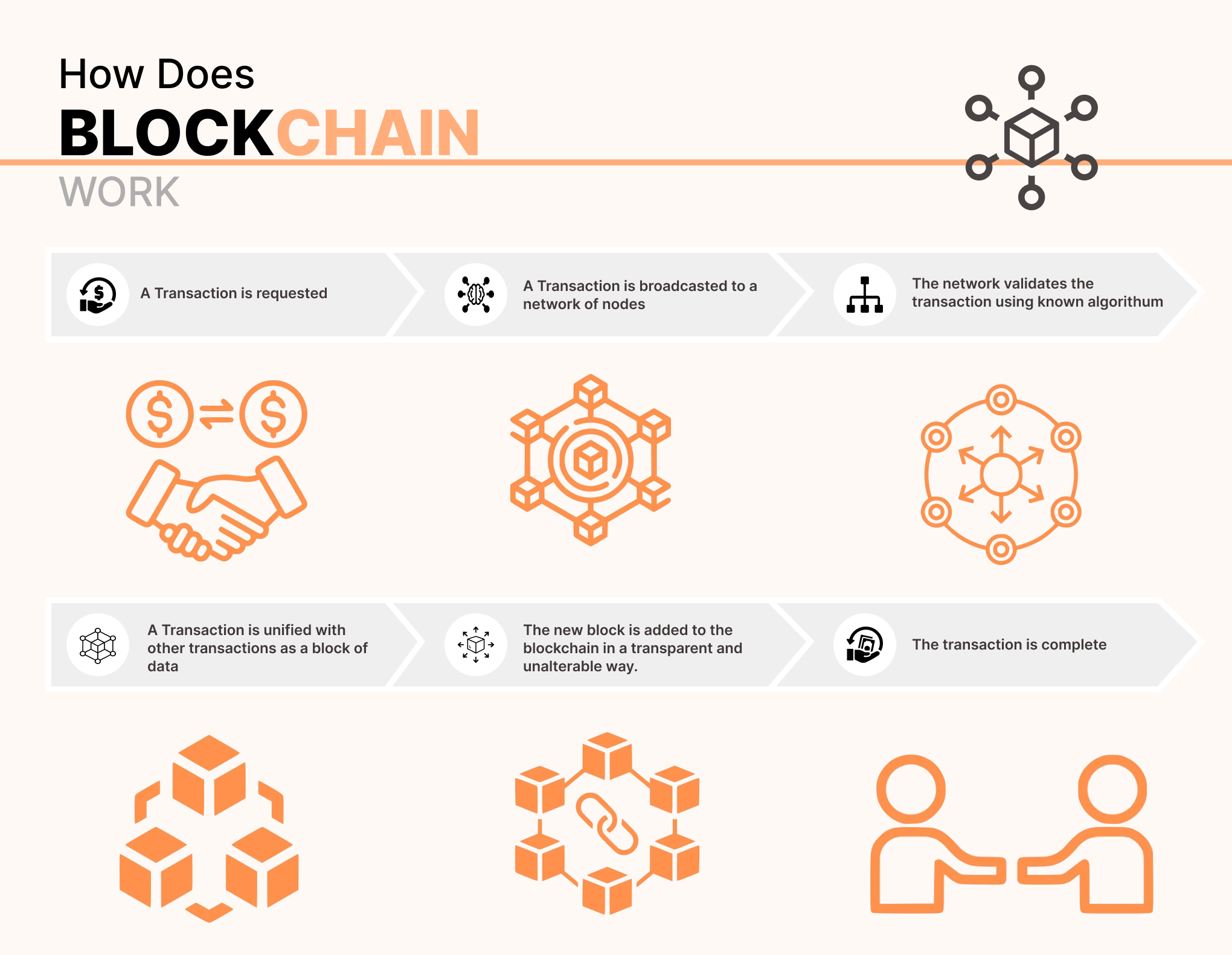 There are 2 different types of blockchains when it comes to how they’re built: Permissionless and permissioned.

A permissionless blockchain is accessible to anyone in the network, but information about its participants will remain hidden via encryption or anonymity tools. Bitcoin is an example of this type of system because it’s publicly known who created it yet also has some level of privacy protection

This type of blockchain is perfect for organizational management because it helps keep track of an organization’s operations internally, ensuring no one can tamper with them without getting caught.

Apart from these, there are two other blockchain types that are flexible and help businesses to leverage it as per the requirement.

In many cases, organizations will find that hybrid systems offer the best of both worlds. Hybrid blockchains allow for a private system to work alongside a public one. This way, they can keep tabs on who has access to what information and determine which data belongs to everyone on the network.

It is also known as Federated Blockchain. It’s almost like the previous blockchain. Overall, it’s a private chain with restricted access for a specific group of people (i.e., those who are part of the consortium).

A consortium chain has its own validator node that initiates and validates transactions; However, member nodes can only receive or initiate transactions, but not validate them themselves.

Why Organizations Must Create Blockchain Apps?

Why are these programs becoming sought-after? We’ve already discussed how they guarantee safety and privacy. But there’s so much more to it than that.

Anyone can verify if the program is working correctly. Every transaction is checked by peer users in a blockchain system; this means any user can tell if something doesn’t seem right with one simple click.

All updates to data or transactions must be verified by other participants on the network; while not every person will have access to certain information, someone else always stores an identical copy of those records on their personal devices too.

Blockchain has an immense impact on several industries. Tracking products and their origin are rather difficult. The same goes for protection from counterfeits. With blockchain, you get a complete trail of the product, tracking its origin and every step of its journey.

Using such a ledger system people can know who manufactured the product, who delivered it, and that it’s not a fraud. Implementing blockchain in the industry will help move information from paper to distributed ledger so all members can access this resource easily.

Cost efficiency should be considered one of your top priorities when considering a blockchain application development project. By improving business processes and removing intermediaries or third parties from the process used to establish trust between two entities – namely buyer or seller.

Moreover, blockchain streamlines operations reducing costs spent trying to keep tabs on information at any given time during operations.

The main appeal of blockchain technology is that it can execute transactions quickly. Using cryptography, people don’t have to depend on a third-party intermediary—or even trust them—to verify each transaction.

All the necessary information for every transaction is recorded in one place. So, it doesn’t take time to search or check things out; this speed up the entire process.

Blockchain also guarantees data integrity through immutability: It’s impossible to change anything without tampering with the blocks that came before it. And because everything you do remains permanently public and distributed across nodes throughout the network, you always know who made what change when and where they did it.

Which Industries Can Gain Profit from Blockchain Apps?

Around 400 new blockchain apps that use the technology are released in the financial industry every month. These apps are designed to increase transparency and create efficiencies for transactions of various types through things like real-time and multi-party payment tracking systems. Crypto wallet development is one such way of creating next-gen payment solutions.

Furthermore, it could allow for faster transfers between banks or other service providers using an accelerated settlement process – all while avoiding human error.

Blockchain does nothing new for the insurance industry; instead, it takes existing solutions and improves them through operational efficiency, cost reduction, greater speed to market, and an improved customer experience.

Blockchain’s immutability and verifiable characteristics allow it to be implemented in cross-border partnerships. While it is also solving numerous problems like fraud detection, reinsurance, on-demand insurance, and microinsurance that have long been plaguing the sector. 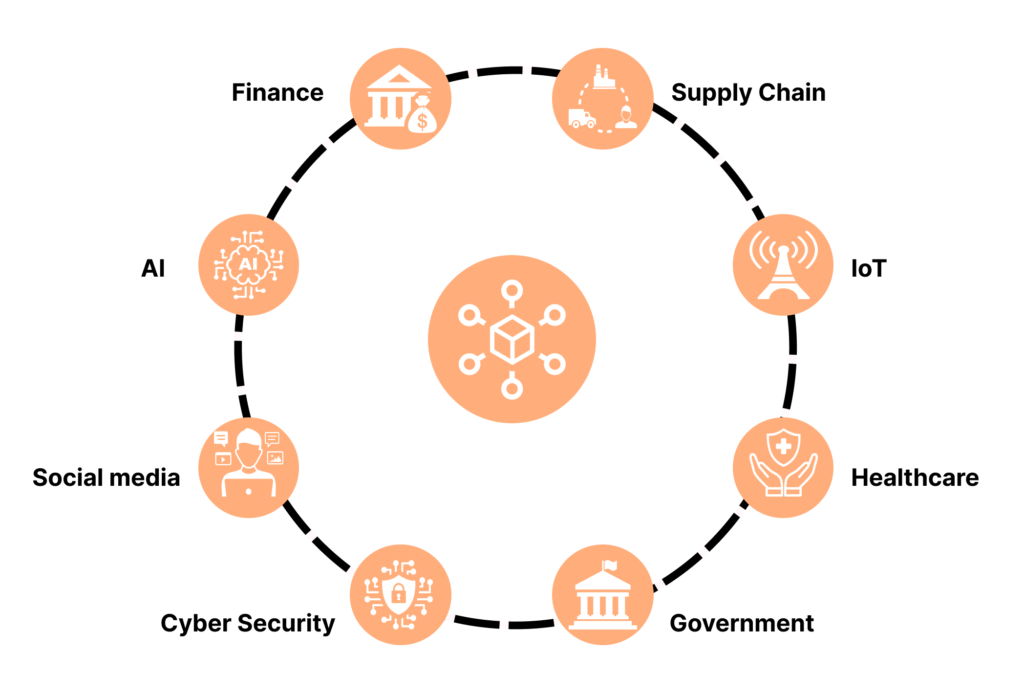 One of the most significant issues in the healthcare industry is the disparate systems used for processing and storing data. These systems store and manage sensitive, personal, and highly identifiable information that is at risk for hacking because they are disconnected from one another.

Strategic blockchain application development for healthcare providers could solve this issue. Healthcare facilities can share data with other members of the network without risking security or accuracy because blockchains do not require centralized servers for storage.

Buying and selling property comes with certain risks: missing information, piles of paperwork, fraud, and clerical errors. But using blockchain eliminates these problems. Real estate companies can use it to record, track and securely transfer land titles so that every document is accurate and up to date. It also speeds up every transaction.

The buyer relies on the seller for trust when making a purchase, but this reliance is often misplaced. There are still counterfeits making their way onto retail shelves, but there are also those unsuspecting customers who buy these faulty items without looking further.

Yet there’s hope—blockchain can make up for this lack of trust and decentralize it from other eCommerce sites. It would offer to connect buyers directly with sellers instead of relying on middleman transactions through centralized systems.

You’re probably wondering how much it’ll cost to make an app. Normally, most people will say it costs anywhere from $15,000-$120,000, and sometimes they can jump as high as 200k or 300k dollars depending on what type of features you need for your app. The final price will also depend on other things like:

Usually, when you work with top app development companies, hourly rates will be around 100 dollars but might go up to 250 dollars. If they’re working on something very complicated. If someone wants cheaper rates, then going to either Europe or Asia usually means they’ll still get similar quality at double the price.

1. What is the process of creating an app with blockchain?

Apps created with Blockchain technology have increased data privacy, making them more secure. A blockchain encoding technique is difficult to break since all the information is encrypted and saved using a cryptographic hash. Decentralized architecture also reduces the risk of third parties sabotaging an app.

2. How long does it take to create a blockchain app?

Duration varies depending on the needs and technology of an application. The project initiation begins with a Proof-of-Concept (POC) trek lasting roughly 20-30 days. Once completed, then there are another 30-40 days until a Minimum Viable Product (MVP) has been created – this includes only basic features.

3. How could blockchain be used in apps?

Blockchain applications go way beyond cryptocurrency and bitcoin. With its ability to create more transparency and fairness while also saving businesses time and money, the technology is impacting a variety of sectors in ways that range from enforcing contracts to making government work more efficient.

Looking for a tech partner to build blockchain solutions for your business?

How Blockchain-Powered Transformation Is Reshaping Businesses

How AI Can Improve Blockchain Technology Solutions
How do you want us to help transform
your business?
Tell us your requirements
What do you aspire to become as a
tech professional?
Explore career opportunities