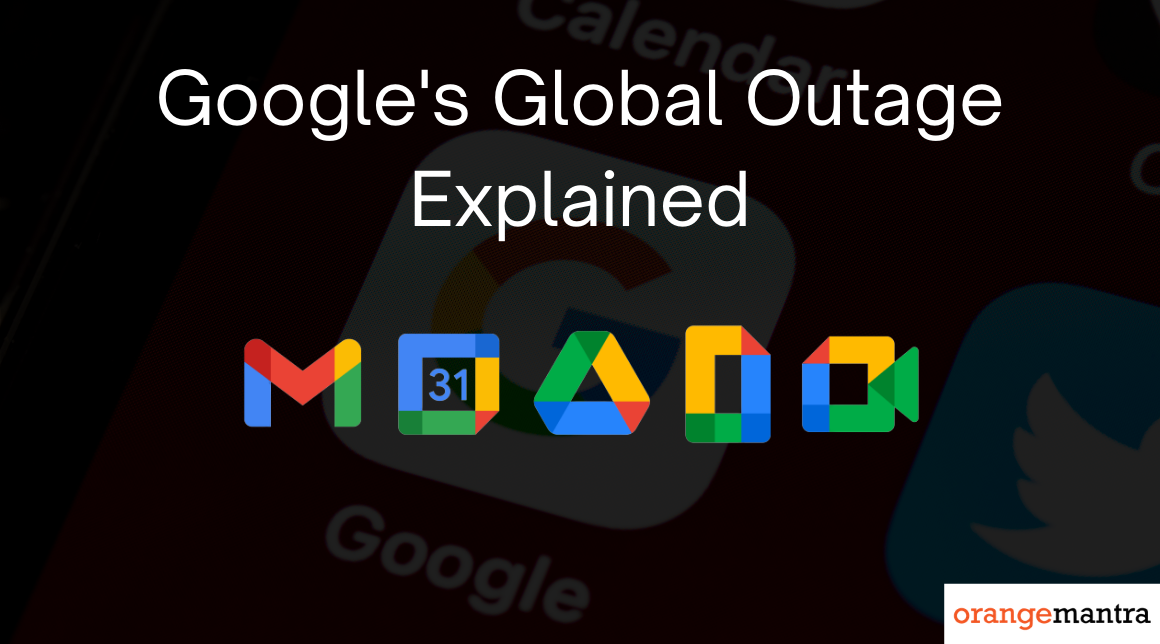 What Caused a Global Outage of Google Search, Gmail, & Other Services

Towards the darkening end of a dark year, some of the world’s most widely used tech platforms faced darkness — for 45 minutes. On December 14, technology titan Google suffered an outage that affected its services, including Search, Gmail, Meet, and YouTube. As these platforms went offline, most of the world, now running on the internet, faced massive disruptions. It forced schools to close and remote teams to pause their work. But what caused this significant glitch?

We combed through the internet to find out the root cause of this worldwide outage. Google initially provided limited information about the nature of the crash. However, it became clear that the glitch affected several Google products, each having more than a billion users. The company’s automated systems didn’t report the problem for the first 30 minutes, The Guardian newspaper reported.

The root cause of the outage

A Google spokesperson later informed users that a failure in the company’s authentication tool caused the outage. The system manages how users log in to services run by Google and third-party developers, as well. Google’s internal tools failed to allocate enough storage space to the services that manage authentication.

When the storage filled up, the authentication system should have automatically made more space available. But that didn’t happen. It means that the system crashed in a way a desktop computer crashes when it tries to operate with a full hard drive.

The glitch made unavailable the tools that do not work without logging in, such as Gmail and Google Calendar. However, third-party services that rely on Google’s authentication platform continued to be accessible for users who were already logged in. But the services failed when users tried to sign in or out of the tool.

Remote work and online learning have left businesses and organizations more dependent on work from home solutions and other online tools. And Google is widely used as a base technology for a staggering number of online services. So, the problems ended up affecting billions of people all over the world. Google later apologized to affected users, saying that it would conduct a thorough review to ensure the problem doesn’t reoccur in the future

Google’s crash severely disrupted services for many virtual workplaces around the world. Google Suite, one of the enterprise software solutions affected, manages an array of services including email communication and workplace messaging through Google Meet and Chat services. It also includes productivity tools like Google Docs, Sheet, and Slides.

Google-powered smart home services enabled people to rebuild their homes around voice assistance. But residents of smart homes too didn’t escape the outage. They were unable to turn on the lights due to a failure of Google Home and Google Assistant. Whereas users of Google’s Nest thermostats were unable to control their homes’ heating with an app.

The problem was not limited to collaboration platforms and workplace management solutions only. YouTube, globally the most widely used entertainment site, too, faced massive disruptions. YouTube failed for users who were already signed into a Google Account. YouTube users could access it in a private browsing mode to view the signed-out version of YouTube.

Making sense of it

Temporary interruptions in popular internet-based services are not uncommon. However, their impact has increased many folds since the onset of the pandemic. As more individuals and organizations rely heavily on digital solutions, even a temporary outage could have worldwide ripple effects.

In November, Amazon grappled with an hours-long outage related to its cloud computing operations. Enterprise cloud solutions, like other tech tools, have seen an astronomical increase during the pandemic. In July, Spotify and Tinder experienced glitches for several hours because of a bug in their software for iPhone users.