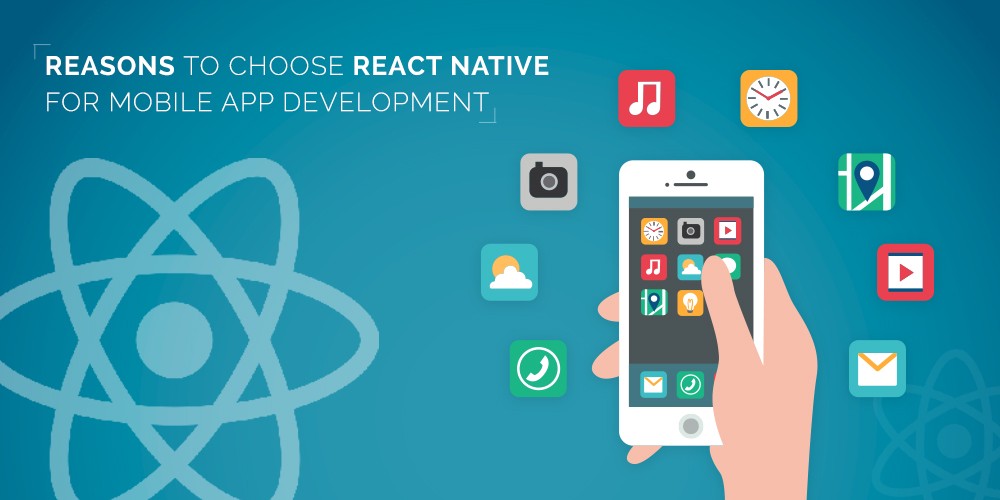 When a business considers investing in a mobile app, the first question is related to the choice of the operating system. Typically, they have to choose between Android and iOS because these are the most popular platforms. While the former offers a wider coverage and is faster to deploy, the latter is known for rendering better customer experiences. But wouldn’t you want a middle path that gives you the benefits of both the platforms without doubling the costs of mobile app development for your business?

The concept of hybrid apps serves as a perfect answer as it bridges the gap between ease of development and optimal user experiences. Essentially, these are the apps which come in a shell that is capable of running natively across both the platforms. Among the technologies used for hybrid app development, React Native comes to the forefront because of its advanced features. In fact, it is regarded as the future of mobile app development. Let us know what it deserves to be called so.

Cross-platform compatibility
Initially, React Native was meant to support the iOS platform but it was soon extended to the Android platform due to popular demand. A majority of its APIs can be used for cross platform app development, enabling developers to create a single codebase which works on both Android and iOS. This translates into lower development costs as well as faster time to market for business apps. Being an open-source framework, React Native also offers compatibility with unconventional operating systems such as Windows and tvOS, making it a versatile choice for businesses.

Native functionality
Despite being cross-platform compatible, React Native offers native functionality thus earning the title of “native” within its name itself. Apps built with this framework are close to native in their look and feel. This goes in the context of an amazing User Interface and excellent performance. The fluidity of JavaScript interactions that it renders within the native environment facilitates responsiveness in the UI, in addition to faster loading times. Even the most complex apps, therefore, run seamlessly by using this powerful framework.

Better development environment
Another reason why React Native development makes a great choice for businesses is that it offers a better development environment. It eliminates the mundane tasks of rebuilding and deployment from the iteration cycle and makes a pleasant experience for developers. Further, the framework leverages Flexbox layout engine for both mobile platforms. The developers need to be familiar with only one layout engine for developing on both Android and iOS.

Compatibility with third-party plugins
The framework is compatible with third-party plugins, which means that the mobile app created with it will not need to employ WebView for functions such as maps. It links the plugins directly with native modules, allowing device features such as zoom, tap, and rotate, which provide faster load times and take up less memory. Also, this compatibility promises smooth user experiences despite the device running on an older OS.

Instant app updates
Instant live updates, also known as hot reloading, is another immense benefit that choosing React Native bundles up. Typically, users need to update apps to the latest versions for getting access to all the features and having smooth experiences. Apps with long update cycles are complicated and businesses need to avoid such complications. With React Native apps, the updates can be pushed directly to the user’s devices. This ensures that the user has access to the updated app versions within more time, without facing any issues.

Supported by Facebook’s community
Another reason why React Native emerges as a significant app development technology for the future is that it is backed by Facebook’s community of experts. This means that you can be stress-free about the future maintenance requirements of the app as you have experts you can rely on for lending a helping hand. Beyond the support, they are continuously dedicated to improving the framework for making it better than ever.

Conclusion
Now that you know all about the advantages that this amazing framework renders, it definitely comes ahead as a smart choice if you are considering investing in a new mobile app or revamping an existing one. From saving time and money to delivering exceptional experiences to your customers, React Native serves as the right choice on every front. The next feasible step would be to collaborate with a application development partner that has the right skills and experience with the platform.

At OrangeMantra, we are a trusted company to hire Android developers, iOS developers, and cross-platform app developers. Our strength lies in a team that possesses diverse skills and experience, including that in React Native framework. So if you want to empower your business with a React Native app, connect with us today!