Magento 1 Support Extended Till June 2020: All That Retailers Need To Know 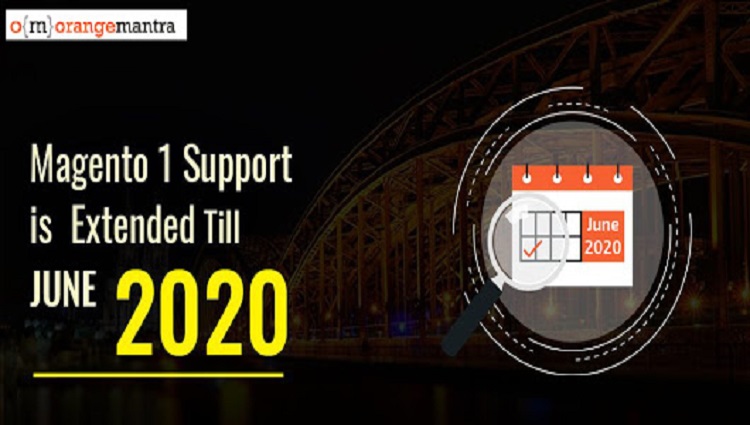 When Magento 2 was released for the first time, there were mixed reactions from the e-commerce fraternity. While a majority were excited because of the impeccable range of new features that it offered, there were others who were apprehensive. With the promise of enhanced performance and scalability came the fear of End Of Life (EOL) for the preceding version. If you are one of the merchants already running their stores on the previous version, the obvious question would be about the fate of Magento 1.

A lot has been said about support being ended for the version in November 2018 which is just around the corner. The most recent announcement from Magento about the support to be extended till 2020 is definitely good news. But now that you have a clear deadline and plenty of time to prepare for the upcoming change, it is right time to get your facts clear and start gearing up for the D-Day. The motive is to ensure that your business is not affected in any way, even when the Magento 1 breathes its last. Let us list all the facts that e-commerce retailers need to know about Magento 1 EOL.

EOL is not the end of life for Magento 1 in the literal sense
If you have a Magento e-commerce store in business, do not fear that it will not work after June 2020. End of life does not mean that the platform will disappear completely after this date; it just means that the platform will not release any updates or security patches thereafter. Essentially, you will no longer get support for your store anymore after EOL. Some of the noteworthy facts are:

End of Life for PHP 5.6 too
PHP is the language in which Magento 1 program has been written. This will change in the coming time as this PHP version will be deprecated by the end of 2018. Therefore, the support for PHP 5.6 will see the end of life even before the Magento 1 does. The platform will be coming up with a security patch to enable the merchants to move to PHP 7.2, the version which is going to be supported till November 2020. Hence, you should ensure that this Magento security patch is installed in your store as soon as it is released.

Third-party extensions and codes
Customization is the key requirement for people running e-commerce stores because they need to have bespoke elements and functionalities that create compelling shopping experiences. As a result, Magento extensions and modules become a necessity. If you are using some, you need to be aware that the support period defined here covers the core platform only and not any of the extensions. This means that the responsibility for maintaining and securing them will be with you.

Magento 2 is the future
With the latest announcement related to the platform’s EOL, the new version undoubtedly becomes the future for e-commerce sellers. The best approach for the new entrants in the domain is to take up the option of Magento 2 development. On the other hand, if you want to stay with the current version till the deadline, you would need to be extra careful about keeping the security patches, modules, and extensions updated. Besides taking extra these measures for the time being, you will have to migrate to Magento 2 before the EOL deadline. It is better to do this in time because there will be no alternative by the mid of 2020, when the platform withdraws support for this version.

Planning an upgrade? Let’s get started!
Since an upgrade would no longer be a choice soon, it is a good idea to have a strategy in place. A well-defined upgrade plan can relieve the stress to a considerable extent. Here are some steps that you need to initiate for putting things into action.

Magento EOL may sound like a daunting challenge but you should take it as one big opportunity to make improvements in your e-commerce store. Since this involves a total revamp, take it as a chance of identifying the flaws and weaknesses of the existing sites and improve on them while you upgrade. At OrangeMantra, we are a reliable Magento development company you can trust to help you gear up for EOL and give you a new start with a fresh, innovative Magento store for your business. We not only take your store to the advanced version but also give you suggestions to improve on its existing features and functionalities while you do so. Connect with us with your requirement and we will create an EOL strategy for you.

How AI Is Enhancing Digital Healthcare Amid New Normal